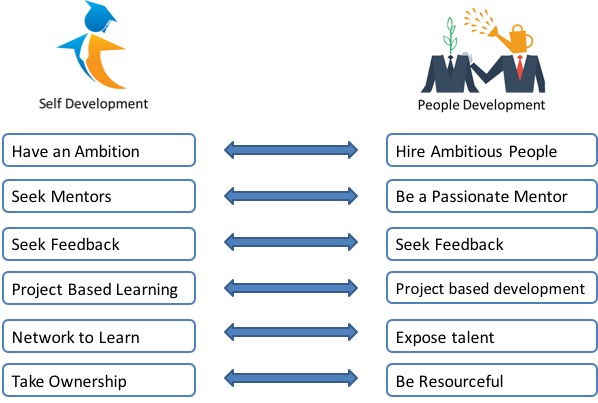 This is a topic that I have been procrastinating over for some time now. I must thank good folks at Cochlear India for inviting to give a talk on people development, thereby helping me overcome the inertia.

Leading people is tough. Ask any people manager. There is a lot of emotional labor. You need to represent the organization & at the same time be empathetic to the struggles team face. One needs to manage insecurities & be patient during the development journey of a team member while absorbing pressure from other team members & seniors who are critical of that team member. Then there are matters like managing relations with cross functions, inspiring high performance, managing career expectations of team mates Vs performance expectations of reporting managers, the list goes on…

It important to have and ambition. Most people look at planning for immediate next role rather than having a long-term ambition. The best time to acquire most of functional knowledge that is needed at highest levels of an organization is when one is at the entry level. One would getter lesser & lesser time at roles of higher responsibility. Having an ambition helps in prioritizing the education, exposure & experience relevant for excellence in current & future roles.

A people leader has limited time to invest in people development beyond the pressures of performance management. This is why it’s critical for leader to have an ambition, as this would give him/her the necessary drive needed for this significant responsibility. Hiring ambitious people would help as they ensure high performance, take the load off the leader & would complement leader’s efforts in skill development through their own commitment to self-development.

Selection of right mentors is critical for career development. Each mentor teaches you an important skill that would set you up for future success. Supervisors are generally reluctant to call out blind spots of high performers, worried of an emotional backlash. Having the right mentors help one identify & address blind spots. Right mentors more importantly help identify your strengths which in turn help be more confident of oneself, thereby develop an authentic style.

On the other hand, as a people leader one has to be a passionate mentor. If mentoring doesn’t excite you, the emotional labor mentioned above will catch up with you & make you a miserable professional. The true satisfaction of being a people leader has to be the pleasure of team members growing & being successful. Then every new team mate comes to the team becomes any exciting challenge for the leader rather than another herculean task.

Introspection is not easy. It needs help from others. You would attract mentors to yourself if you are good at accepting feedback & acting on it. Much like how teachers are attracted to good students. People would hesitate to burst your bubble if it’s likely to be taken personally.

As you grow to higher roles, your reporting managers would have lesser time to give you feedback. Willingness to accept feedback from team would help you grow as a leader both functionally & behaviorally. This off course depends on the trust you have developed with team & the inclusiveness in your leadership style.

People development would entail considerable amount of investment in skill development. Doing one’s job repeatedly wouldn’t help in growing in to a different role, neither would it help perform at a higher level in the current job. Both would for sure require additional education, exposure & breadth of experience. Hence an important tool for self-development is project based experiential learning. This is what I like to call the “Night Job” as you don’t get paid for it & not to be assumed as a job done at night.

A people leader’s role then should be to inspire team to take up projects that would help in skill development in line with personal aspirations. This wouldn’t be easy if the leader doesn’t walk the talk. He/she should also be ready to invest time beyond the normal performance management duties to facilitate skill development.

It’s important that one knows enough people in the organization. Let me qualify this statement. I am not referring to coffee time networking. It’s about understanding other functions, people who work in them, their perspectives, priorities & how they contribute to organization goals. They also should then know you in the same manner. This understanding is the first step towards collaboration. Collaboration helps you perform better, develop respect & gain visibility in the organization. A promotion in matrix organization depends on inputs from different functions and not just your reporting manager. If you are known & establish yourself as a someone who would bring value to the new role, you are more likely to be considered over a lesser known individual with similar assessment scores.

Networking through collaboration needs to be second nature to a leader. Its helps the leader connect with all other functions in a manner that adds value to team’s performance.

Leaders should also not hesitate to expose talent across the organization. Many leaders don’t do this out of over protectiveness or because of fear of losing the talent. Both are counterproductive. Facilitate growth through networking.

People leaders are not expected to be supermen who have the capability to develop all kinds of skills in their people. What’s expected of them is to be resourceful. Can the leader help the team in the above-mentioned steps towards self-development through connecting them to right resources in the organization?

Let me sum it by saying this depends on both capability coupled with a genuine interest in people.