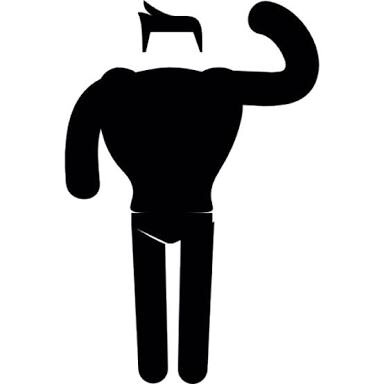 We belong to a culture where leaders are forced to portray a Macho image. Macho leadership style is perceived by peers, supervisors and the rest as symbol of strength and courage. This style of leadership has existed for many decades in political, business and social spheres.

This blog is attempting to evaluate impact of Macho Leadership Culture and suggest an alternative. This blog is too short to cover all aspects of such a vast topic. However hopefully it will trigger sharing of different perspectives from readers which will help in my leadership journey.

Macho leadership has its perceived advantages. Macho leaders tend to appear confident and in control. This culture in an organisation brings in a level of demonstrated aggression in its leaders that is thought to be necessary in a highly competitive market.

Macho leaders work with the intent and belief that their actions and behaviours are good for the organisation and its people. Macho leadership is thought to be good for conflict resolution as the leader’s word is considered final. Its preferred by leaders who employ command and control as lever for execution excellence.

They attract loyal followers. I know of a leader whose followers attest that he “protects” his people and no one from other function dares to touch his team. It’s another question whether his team may appear to be collaborative to others.

There are a few compromises/blind spots in this style of leadership culture. The first causality in my view would be diversity of opinions and styles, as everyone is supposed to listen and revere the Macho leader.

People fear authority figures and they tend not to share news or views that are not aligned with that of the leader’s. This means such leaders may never be fully in touch with the reality.

Impact of this culture on the leader is the stress of keeping up with the image of infallibility. Failures are felt as humiliation rather than new learning. Organisations with such culture end up being risk averse. Leaders of such organisations would typically need evidence up on evidence of surety of success and returns before approving any new initiative while on other hand, calling for bold moves and innovation. Employees in such organisations exhibit fear, insecurity, frustration and in extreme cases, apathy.

Leadership in today’s VUCA world is not about controlling and managing actions of people. Today’s world calls for a leadership style that fosters learning, creativity, collaboration, empowerment, disruptive innovation and agility. This means not only leading execution, but also leveraging collective brain power of individuals in an organisation. I believe while one can command action, collective intelligence is only possible with liberated minds.

Leader’s aim hence should be to inspire free thinking towards a common purpose. The style that suites this in my view is Servant Leadership. An organisation with servant leader culture would be able to leverage the strengths of its employees, have lesser collective blind spots and have the risk appetite required for innovation.

While the outcome of such a change is fabulous, its difficult to shift from a Macho Leader culture to a Servant Leader culture. Servant Leadership requires leaders to have highest level of self reflection and awareness of the impact their actions, behaviour, words and even body language have on their teams. A transformation of this kind is arduous, requiring bold and courageous moves. It requires letting go of control, which would be terrifying for a leader used to command and control style of operation.

It’s also difficult because people would take time to adjust to this shift. It takes time for a majority to realise that its ok to make mistakes and more importantly, speak candidly to a leader. They may be sceptical at first, and closely observing differences in what the leaders “say” and “do”. If the say-do ratio is not close to 1, people will start doubting the intent. For eg; if a servant leader narrative is followed with a public “blasting” of a ‘carrier of bad news’ or ‘a less than perfect business plan’, say-do ratio may get questioned albeit not publicly. So will a special dining area/dish in a cafeteria or exceptions in spending by leaders in a year where employees are encouraged to cut costs. These same actions may not get questioned in a Macho Leader culture as there is no difference in say-do there!

The transition will be easier if your team helps! Be open about the struggles you have in transforming to a servant leader and express strong intent to change. Have open dialogues with your team on what it means to be servant leader. This way your team would help you and participate in your journey. And you would have developed a few more future servant leaders from within your team.

While the topic deserves more reading and research, I will leave you with a quote that is attributed to Lao-Tzu on leadership: